It has been confirmed that there is almost no performance impact on Unixbench due to vulnerability countermeasures on the service infrastructure side under the following verification conditions. We have confirmed that the performance has improved in terms of throughput. However, the degree of impact depends on the customer's system environment.

It can be effective when customer’s instance with kernel updated is stopped and launched after complete mitigation in infrastructure level. 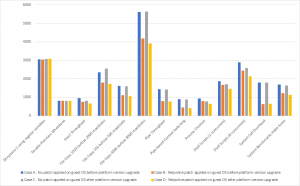 - Each case is the following condition;

No patch applied on guest OS before platform version upgrade

No patch applied on guest OS after platform version upgrade

- This result is to test Unixbech on VM with default setting which created from Red Hat Enterprise Linux official image.

- All results of the above performance test shall not be guaranteed performance.

Is this page helpful?

We appreciate your cooperation in improving the site

Did this FAQ be helpful? If you have any comments, please let us know.

Your feedback has been received.